So, in the interest of semi full disclosure..... I am over weight.  I am the heaviest I've ever been, and I don't really like it.  So, to do something about it, my best friend and I decided we were going to download an app called C25K (couch to 5K).  Basically, if you have never run before in your life, you do interval training (alternating running and walking) and at the end of 6 weeks, you will be able to run a 5K.  The first couple of times I did it, I wanted to die.  Literally.  Yesterday, it got easier, and I ran faster then I have before.  Today, I measured my success by the fact that sweat was pouring down my face into my eyes.  That has never happened to me before, and it felt kinda good!
Posted by Kendra at 22:26 2 comments:

Email ThisBlogThis!Share to TwitterShare to FacebookShare to Pinterest
Labels: getting in shape, Life

....sooner or later.   Quite frankly, I am amazed that it took 6 and a half years.  I am quite proud to say that I stayed VERY calm through the whole thing.  Oh, I haven't mentioned what it is yet?  Well.

Abigail came into our room tonight with her finger up her nose telling me that she couldn't get the round thing out of her nose.  I assumed that it was a stubborn booger that didn't want to move out of her cute nose.  So, I asked her what round thing.  She said "The pink thing."  That was my first indication that just maybe it was not a naturally occurring phenomenon taking up residence in her nostril.  I, very calmly, said "Did you put something in your nose?"  Internally, I was screaming my head off and running around in circles.  I am quite proud of the fact that after 3 kids, I no longer freak out (at least outwardly) by some of the things my kids do.

I took Abigail to the couch with my trusty tweezers, mentally thinking about how I was going to get her to let me put them up her nose, and once I had them up there, how I was going to extract this pink thing.  Then inspiration hit.  I plugged my one nostril, and showed her how to blow out the other one. We practiced mom doing that for awhile (the results were less than pretty), and then Abigail tried it.  The pink bead stuck in her nose came out after two tries.  I like to think that we were practicing for labour.

Well, I am going to take off my super hero mom cape for the night!
Posted by Kendra at 20:59 No comments:

The memories of my childhood are better left in the past.  Do you ever have that happen?  I have been watching some of my favorite old movies with my kids the past couple of weeks.  A short list is as follows:

And then today, we watched Darby O'Gill and the Little People.  I remember that when we were little, my sister did not like that movie, but I did.  I think I have changed my mind.  I'm not quite sure what I ever saw about the movie in the first place.  The only thing remotely interesting about the movie is that the leading man who is the love interest for Darby O'Gill's daughter is a VERY young and rather handsome Sean Connery.

We were driving home tonight when Annika asked me how many days it was until next week.  I asked her why, and she said:

I bought the CUTEST little bowl the other day for Tyler's room....at the store that shall not be named.... 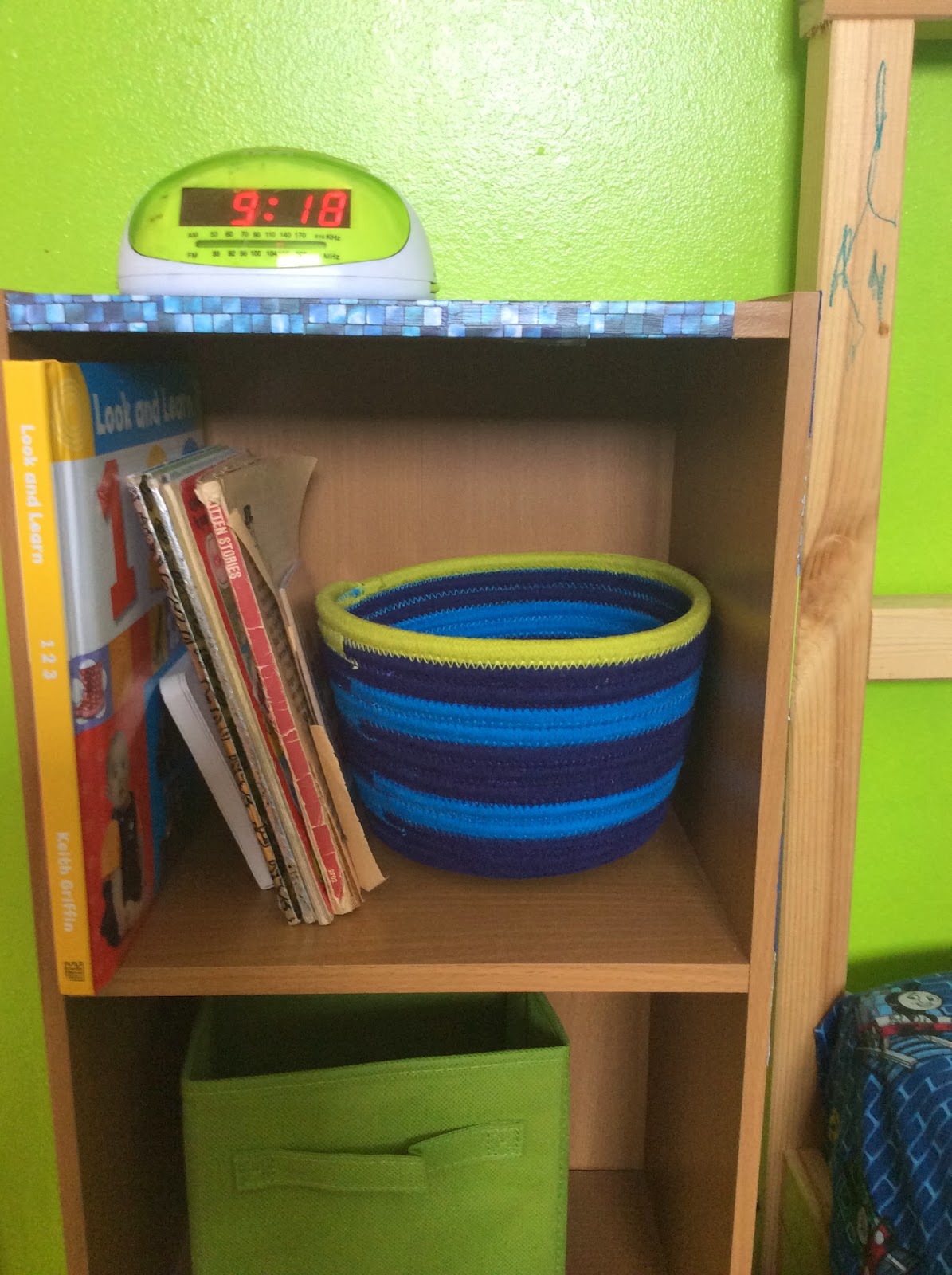 It fits his color scheme perfectly, and I love how it's woven and circular and I could go on and on.....

I put all of Tyler's cars in the bowl, so he would always know where they were when he wants to play with them.  EXCEPT.....I found the cars on his bed the very next day.  The bowl?  Well, it was being used for better things. 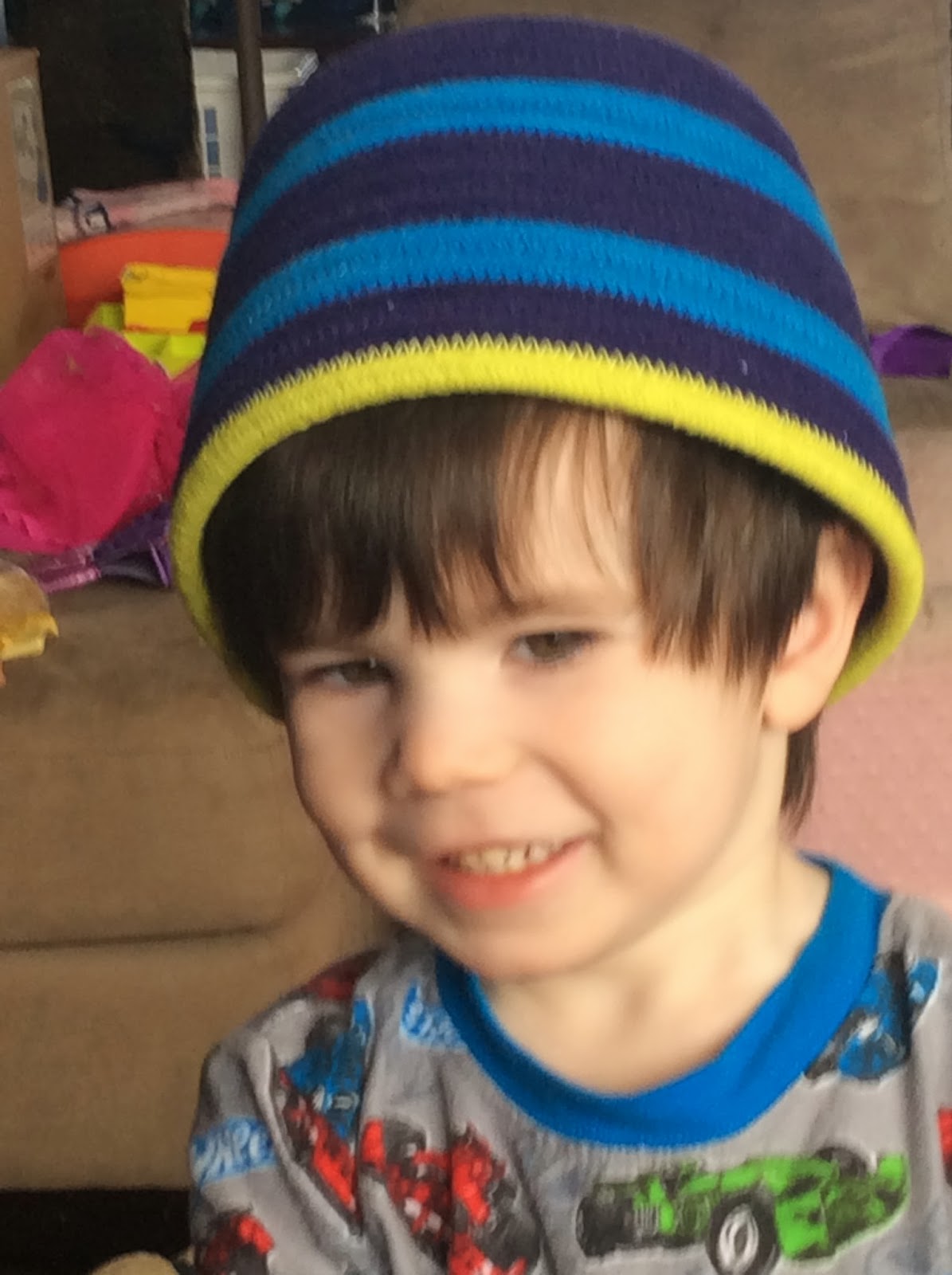 It fits his head perfectly, don't you think?  What a cutie.

I posted yesterday about how Annika was enjoying her new book.  Abigail also liked her book, I think mostly because it was pink!  While she was coloring in it, Tyler walked into the room and so she invited him to color with her.  After a little while, Abigail got tired of sharing and told Tyler to go away.  She explained it to him this way.

I bought the girls little books today.  Annika was so excited to see hers.  She's been busy writing words down in it and drawing pictures.  Tonight, she grabbed it and sat on the couch and told me she was busy reading a story.